RIAPS relies on an underlying Linux operating system - currently we are using Ubuntu 20.04. Any hardware platform that runs this OS will likely run (most of) RIAPS. One of the RIAPS services: the time-synchronization service requires that the network interface of the hardware platform supports the IEEE-1558 (Precision Time Protocol). This is necessary for high-precision (read: better than NTP) time synchronization only.

Application components are implemented in Python (3.8). The developer has to follow a structure for the components.

The table below lists the main ingredients of RIAPS. Note that these are only the main processes; there are several run-time libraries, configuration files, etc.

Each riaps_actor runs under a dynamically generated user-id/group-id, with non-root privileges. It is launched by riaps_deplo.

Each riaps_device runs under root privileges. It is launched by riaps_deplo.

This executable implements the deployment manager that provides the deployment service, resource management, and fault management. It typically runs as root, although it can be started as non-root, in which case some functionalities will be lost (like resource management). Its main task is to receive control commands from the control node (riaps_ctrl) and control the execution of the apps: launch, stop, and remove. It launches the riaps_actors of the app and the riaps_devices on behalf of the apps. It maintains communication with the actors: it sends messages to them, as well as it receives fault notifications.

When started, it locates the riaps_ctrl process by doing a lookup with the help of the rpyc_registry (for the name RIAPSCONTROL). For this reason, the RIAPS target nodes and the control node must be on the same IP subnet.

This process can be started manually, although typically it is started by the systemd of Linux. It is implemented in Python.

The timesyncd service tunes the configuration of the underlying components of the time synchronization service. Primarily, it monitors if a GPS reference clock and/or a control host is available as additional timing references. The timesyncctl tool is a command tool to configure the time-synchronization service based on pre-defined roles (See the documentation on the riaps-timesync repository for details). The service is somewhat independent from the other elements of RIAPS as it’s function is to keep the clocks of the hosts synchronized. The clock can be read by application components using standard calls available in Linux.

This executable runs on the control node and is used for download apps to the target nodes and launching them via the riaps_deplo instance running on those nodes.

The figure below shows how the various elements are deployed on a system. 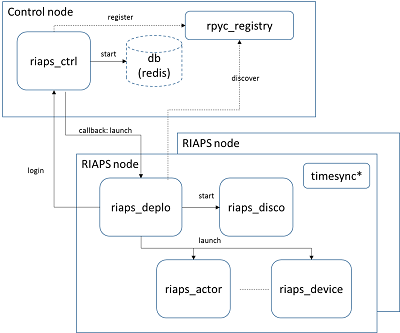 riaps_deplo is typically started automatically (by systemd, for instance) on the target nodes, and so is rpyc_registry on the control node. riaps_ctrl is started manually on the control node. These processes then will launch the other processes. (The diagram also shows a redis database - this is used only if the centralized discovery service is used; not relevant for the current implementation of the discovery service.)

A RIAPS installation includes one development / control host, and a network of target hosts. For the former, a pre-configured virtual machine is provided: an x86_64 (or amd64) machine (although a physical machine can be used as well, after some serious configuration). For the latter, we provide a bootable SD card image for a Beaglebone Black (BBB), Raspberry Pi 4 (RPi) and Jetson Nano boards.

The development host and the target nodes must be on the same subnet.

One scheme for this is shown below. Here, all nodes are connected to a router that runs a DHCP service. In this case, all machines can access the Internet if needed. 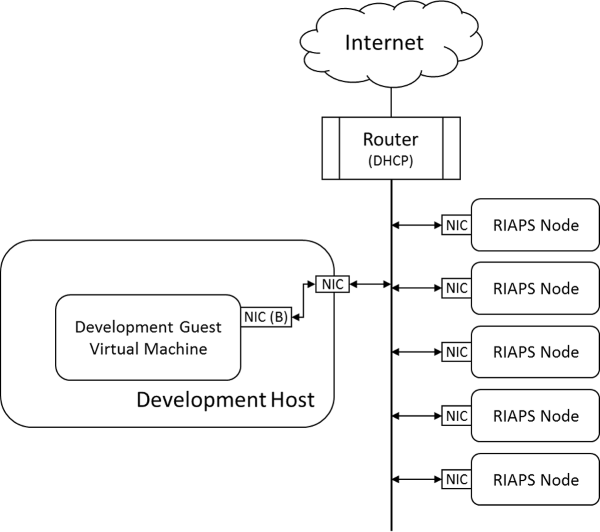 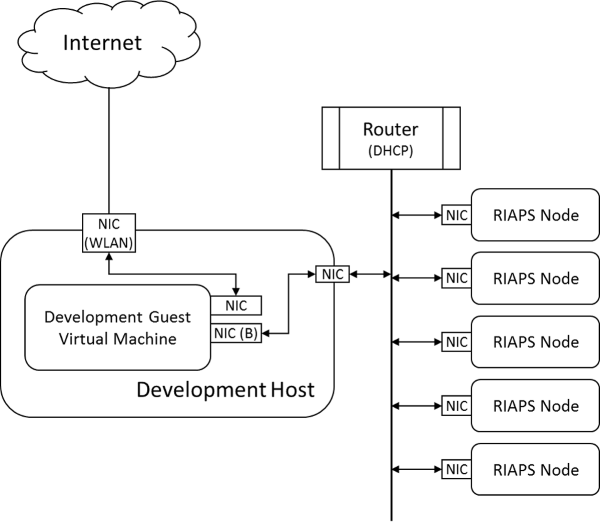 If a host has multiple physical NICs, riaps_ctrl and riaps_deplo must know which NIC to use. This is controlled by a configuration file: /riaps/etc/riaps.conf via an entry called ‘nic_name’. This has to be set to the name of the NIC, e.g. eth0 on the BBBs, enp0s3 for VMs. If not set, RIAPS will attempt to use the first NIC which it finds on the machine.

riaps_deplo typically runs on the target nodes with root privileges but under the username riaps. The riaps_actors it launches run under a dynamically generated user name. The target nodes must have a riaps user account with the security keys set up. The target images has these pre-configured.

riaps_deplo relies on two environment variables that must be set correctly.